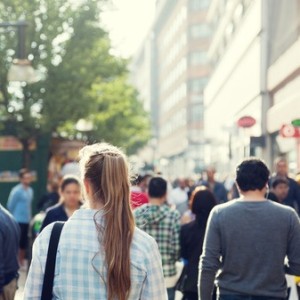 Your customers and clients have become nomads.

What are we talking about? Advancements in mobile technology has created a rift in the way consumers receive advertisements. Not too long ago, consumers were like a tribe of cave dwellers. We all drank from the same river, picked the same fruits, and shared in on the same stories. Marketing was easy back then because your message could reverberate off the cave walls and influence the predictable life of the traditional tribe – thanks to mass media like TV, radio, and print.

Today, mobile technology has moved people beyond the cave. Individuals no longer depend on television, radio, and print for all their news, entertainment, or pop influences. The masses have divided. And it’s not all due to mobile apps and social media. Culture itself has shifted away from the tribe-like way of gathering for consumption.

The “traditional family” has changed since a new generation of women has been encouraged to establish a career instead of rely on a spouse for income. As a result, singles have doubled within just one generation. With this influx of individuals consuming content from multitudes of different platforms, it’s way more difficult to advertise. Advertisers have to use multiple different “voices” to reach this diverse audience of individuals.

That’s what brings us to our top 2 reasons businesses should still buy mass media:

While consumers have left the cave, advertisers can still rely on “homecoming” habits. It’s still early enough in mobile advancement for consumers to remember their roots. In other words, masses still gather for TV and radio even if they enjoy consuming from smaller media channels. For example, the Cabletelevision Advertising Bureau reported that 80% of viewers watched ad-supported television compared to Facebook, YouTube, and other video platforms in October 2014. Also, Ipsos did a survey that found 99% of consumers are satisfied with traditional in-car audio setup, as opposed to radio apps. While mobile technology will continue to improve and attempt to match the traditional conventions enjoyed by individuals, the attention of the masses still leans toward traditional technology.

The second reason to benefit from mass media while you still can is because it offers a higher return on investment (ROI). Best selling author and marketing consultant, Roy Williams, found that new technology “costs 4 times as much per person as broadcast radio.” While these new ways of digital marketing are highly targetable, they provide a much smaller ROI compared to mass media results. Today you can still get a bigger bang for your buck using mass media than individually targeted media.